How to Feel More Confident As a Student

Are you the kind of student who does OK at school? Parents and teachers sometimes nudge you, telling you that you’re not quite living up to your potential because your grades could be even higher than the B’s they are now?

I have a client like that who was tired of feeling that he could probably perform even better at school if he were only more motivated. We worked together for a quick eight sessions — and then he took his final exams. Voila! What he told me amazed me, and shows that just a few skills can make some major changes in a student’s self-esteem. Watch the video, where I tell you the full story of this client and what he discovered.

Hey there, don’t have time for the full video? Don’t worry I’ve got your back, here’s a summary:

I’ve been trying a little experiment that I want to tell you all about. I have a few clients who may have a learning disability of some sort but are extremely high functioning. They average decent grades, typically B’s but A’s as well sometimes. The reason they come to me, especially the client I am focusing on in this video, is that he and his family felt that he wasn’t living up to his potential in school. He said that he didn’t feel motivated to put in a lot of effort and that he felt he could be more motivated, but he wasn’t sure how to get there. So what him, his family, and I decided to do was to run him through The Anti-Boring Approach to Powerful Studying in only eight sessions, just to get him setup with the time management, organization, and studying skills he needed to be able to really give school his all.

At the time I recorded this video I’d just heard back from him, and for reference, he’s a junior in high school, about his final exams. Now in the past, he’s always just coasted through school, as we talked about above, and that included his exams. However, exams have always caused him anxiety as he’s felt he should be doing more but wasn’t sure exactly what to be doing to prepare for them, and lacking the motivation to do anything. This year, on the contrary, he said he went in feeling like he was ready and that he knew what he was doing. His confidence was a LOT higher this year around, now that he had the skills he needed to really put forth his best effort. And while his grades have only had minor improvements from the short time we’ve worked together, he told me, 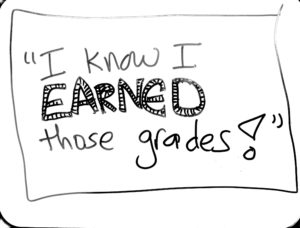 And that’s the important thing here. His confidence and self-esteem as a student have skyrocketed. With just a few short sessions and a handful of tools and skills he’s gone from “doing okay but having low self-esteem” to “doing okay with high self-esteem.” That’s what we, as teachers and parents, want for the children we love, to see them feel good about the hard work they put in.